‘Cloaked’ is an abode design intervention, monolithically pitched into a tightly knit urban setting. It is enclosed on all sides by an overpowering city fabric. The design was incorporated into a challenging triangular site profile with acute angles at two of its corners. Whilst two of its edges faces vehicular roads, an edifice engulfs its third. The western corner manifests the highest point on site, surrounded by running pavements and roads along its periphery. The terrain gradually slopes down along it’s northern edge from west to east.

Taking advantage of the sharp angled plot, the building towers in a defensive fashion to fight against the paraphernalia of the imposing city fabric. Its elevational profile has an armor-like appeal, further accentuated with a large corten steel sheeting along the northern facade. It conceals all activities within the three-sided fortification, and showcases a sudden bout of exposure at the terrace of the building. The construction appears to levitate at different horizontal planes adding a certain depth to the facade surfaces. The primary bulk is lifted off the street level translating into a stilt parking at ground level. Whilst the terrace level parasol manifests a sharp angled concrete slab, giving it a sense of finesse.

The building sports unfinished neutral concrete bands all along it’s surface corners and edges. It is strategically juxtaposed with the flame red accent of a rusted and perforated corten steel sheeting. The sheeting is framed delicately within the concrete frames, creating a protective veil-like fabric along the north facade.

Programmatically, the core of the site unifies and divides the layout into two distinctive activity zones resonating vertically and horizontally through the building. It houses a double height living space and stairwell. From here, activities radiate towards the western and eastern wings on either side of the triangular layout. The first floor accommodates a kitchen, dining and spill out terrace towards the eastern wing, while the western wing accommodates a bedroom with an attached bath. The concept resonates to the second floor layout as well. Individual bed and bath spaces are accommodated in both wings that eventually converge at a pedestrian bridge at the core. The terrace at the third floor level, opens up significantly creating a scenic vantage point to the generously canopied treelines of the city. It accommodates an enclosed terrace lounge at the core, surrounded by open terraces along its periphery. A guest bed and bath sits at the eastern wing of the terrace layout.

The defensive fortress-like exteriors suddenly translate into warm and protective finishes of the interiors. The spaces showcase rustic and earthy tones against a neutral palette of walls and flooring, adhering to the scheme of the building. This gives ample room for earthy accents and interior landscaping that aesthetically enliven the spaces. The dappled light streaming in through the corten sheeting screen, adds the finishing touch to the scene. By creating distinct lighting effects that render the interiors in a ‘new light’. 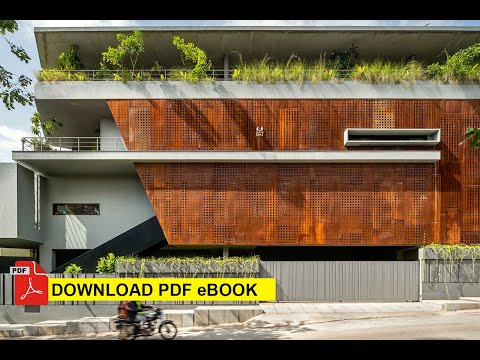